Not yet a member? We offer full benefits!
Become a Member Today
Join Forum
Tweets by @nogcsa
< Back
NOGA Hall of Fame 2011 Inductees 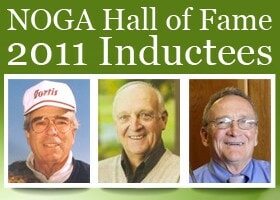 We invite all Northern Ohio Golf Association members and friends to join us in honoring these three outstanding individuals.

Cost: $35 per person (includes dinner hors d'oeuvres)
Information:
The 2011 inductees have a combined 177 years of experience that includes all facets of the basic and essential responsibilities linked to the game of golf. You name it...these three inductees have done it - champion golfer, superintendent/general manager, service to turfgrass management, caddy/golf professional/locker room manager and lifetime amateur. These gentlemen share NOGA's mission of "Promoting Golf and Preserving the Traditions and Integrity of the Game."

Ray Beallo
One of the top amateur golfers in northeast Ohio in the 1960s and 1970s, Beallo was a longtime member at Sharon Golf Club. He still shares the single-round tournament scoring record by firing a 6-under 65 at Hawthorne Valley Country Club en route to winning the 1971 Northeast Ohio Amateur Championship. Beallo also won several NOGA and Cleveland District Golf Association tournaments during his outstanding career, earning him CDGA Player of the Year honors in 1971 and 1972.

Frank Dobie
Few people have made a greater impact on the turfgrass industry than Dobie. He has been a superintendent in northeast Ohio for more than 50 years - the last 47 years as superintendent and general manager at the Sharon Golf Club. In 1988 the Northern Ohio Golf Course Superintendents Association awarded him the Mal McLaren Award - the most prestigious award presented by the organization for contributions to the game. Last year Dobie was given the Col. John Morley Distinguished Service Award by the Golf Course Superintendents Association of America.

Paul Lazoran
Very few people can say they spent 59 years working at one place - Lazoran is one of that rare breed. "Paulie", as he is called by his countless friends, started his career as a caddie at Firestone Country Club at age 9. Throughout his career he caddied for many great players like Gary Player, Al Geiberger and Dave Stockton during the old World Series of Golf and CBS Golf Classic at Firestone. He spent most of his years as the locker room manager at Firestone and counts as his friends some golfers that you may have heard of - Player, Nicklaus, Palmer, Price and Mickelson just to name a few.
Sponsors

Not yet a member? We offer full benefits!
Become a Member Today
Join Forum
Tweets by @nogcsa